The Olympic Games are on!! Woohoo! Ever since I was little, my family has been watching the Olympics... the Winter ones in particular. It is one of my favorite traditions that we do as a family and it is always a big event when Olympics are playing on TV.

This year however, it's a little bit more complicated. We usually have satellite and can watch EuroSport for English commentary, but earlier in the fall we canceled satellite, because we just didn't use it very often anymore. But now, with the Olympics, we don't have a good steady stream of sports playing in English!! Luckily, I can download the sports that we want to see on Torrentz, so that's how we keep up. It's not as convenient, but hey, it works! 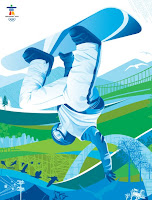 My favorite Winter Olympic sports are Figure skating (of course!), the Snowboard half pipe and Moguls. Ahh... it's so much fun watching! And it helps that Americans do well in those sports too. In fact, in two of those sports, Americans have already one two gold medals! And I don't even know what all has happened, so I'm sure there are more gold medals in those sports!


On another note... I'm not sure if you have noticed, but on the right side of my blog, I have put a "visitor counter". It counts how many views I have gotten. I had no idea that many people looked at my blog! Who is it?? Are there more people that read my blog regularly that don't comment? Or are there random visitors every once in a while? What is it about a blog anyway that we like to read? What do you expect when you come to my blog and see if I have a new post? Hmmm... the pondering of the meaning of a blog.

For me, a blog is not only a way for other people to stay connected to me, but also for me to remember what all has happened in my life. Sometimes it's hard to remember those little stories like baking gingerbread with a Czech grandma, or learning something new through God's Word. That is why I like to write things down. It helps me realize that I am blessed and that I have a very rich life. When I'm down or sad, I look back at posts about happy times or fun trips. It's great having a blog!

I can't wait to continue watching these 2010 Vancouver Olympics closely. YAY for the Olympics!!
3 comments

Email ThisBlogThis!Share to TwitterShare to FacebookShare to Pinterest
Labels: events

My Fave Song: The Photosynthesis Song

Last week in biology class we were studying photosynthesis and our teacher (Mrs. Gorna) wanted to make it more interesting for us, so showed us an English video called "My Fave song: the Photosynthesis song". I thought that this was pretty funny and silly, since I'm an American and understood everything said in the song. The Czechs in my class were a little confused, but found it silly anyways I guess. But I had an idea.

I thought it would be fun if I asked to be orally tested in biology the next week, and by then, I would learn this ridiculous song. So I did! And after my normal testing I sang the Photosynthesis song (in front of the whole class). And it totally payed off! Instead of giving me either a 1 or a 2 (she hadn't decided yet), she gave me a 1! Haha! It was a nice change to get that kind of reaction from a teacher because I sang a song she played in class.

Here's the video of the song... it's really random and funny! (And beware! The tune of this song gets in your head very easily!)