This year's theme for Founder's Week is "Running the Race", but I won't be listening to many of the sessions about these topics because I'll be running a different sort of the race: the "EGS" one. 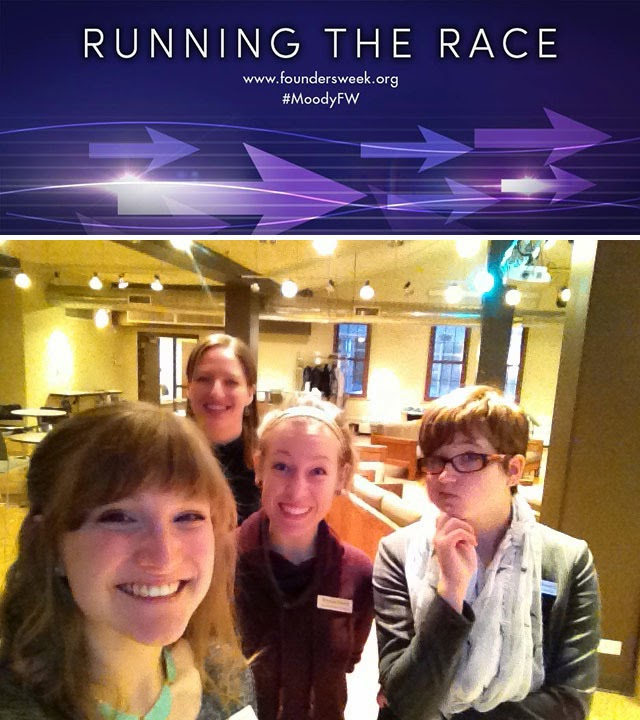 I work with Event and Guest Services, and get to play a small role in Founder's Week, helping coordinate ushers along with the other part-time EGS employees and my supervisor. We hang signs, facilitate offering, stand a lot, answer questions, and generally try to just be helpful while holding our fancy-looking binders with conference information. It's a small part in the conference, but I enjoy being on the coordinating side of things. Yes, we have long hours, but it's fun greeting people and getting to know the other ushers in the in-between moments.

I started noticing something yesterday. Last year I ushered at Founder's week too, and was completely exhausted every single day. Yet, I realized that I've felt fine so far. I was actually happy to come back to my dorm room yesterday after one of the sessions to a group of girls eating their boxed lunches. My introverted self was happy to go from people to more people - go figure!

That is definitely a contrast to last year, and it's encouraging to see that I'm becoming more ok with being around groups of people for extended periods of time. Maybe it was Gull Lake that helped? Maybe it's just that I know Moody better now? I don't know, but I thank the Lord for that.

Even though I'm sick with a cold this week, God has been sustaining me. I know it's Him and not me, because normally I wouldn't have any spare energy. The fact that I wouldn't mind hanging out with friends in between sessions means that the Lord is surprising me with His strength. I wouldn't be able to run this "race" without Him, nor any other one for that matter. This week has been great so far!

Email ThisBlogThis!Share to TwitterShare to FacebookShare to Pinterest
Labels: Moody