It's a foggy, cozy Saturday morning.

When I was little, there was something magical about the smell of french toast coming from the kitchen on a day like today. It's a rich, cinnamon-y smell that makes its way through the whole house. When I take a deep breath, even now, the aroma still lingers in the air after today's breakfast. 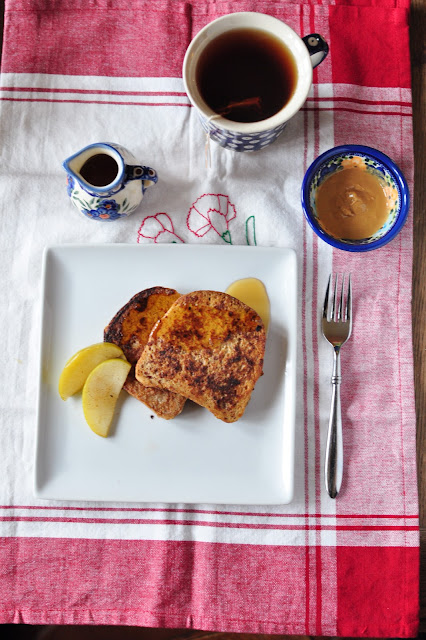 French toast was one of the very first things I learned how to make. The first was cinnamon toast (toast, butter, cinnamon, broiled in the oven...easy enough!). The second was this. I was eight when I started writing down favorite recipes that I could make all by myself. Mom bought me a little turquoise book, which I labeled (with a label-maker, yes!) - "Claire's Recipes". And so my love for cooking began! 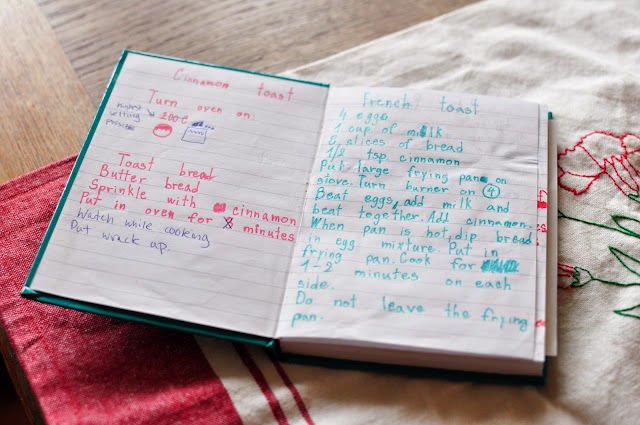 I remember feeling so proud of this book. Sitting at our kitchen table, I diligently wrote down the exact words my mom told me to write, making sure I made no mistakes. I especially love the last instruction on this recipe though: "Do not leave the frying pan." Because as an 8-year-old, it is definitely possible I would have left and completely forgotten about the french toast! Ha! Good thing I wrote that down!

French Toast is super easy. I mean, really, if I could make it when I was eight, then that proves it is simple. Today, now that we're gluten free, I use Schar Gluten-free bread (found at DM, or Billa, it's the best gluten-free bread I know).  To give it some extra pizzazz, Mom and I also stewed some apple slices-- a yummy addition to this classic!

I hope you enjoy this staple breakfast item as much as we do. It's delicious served with anything! 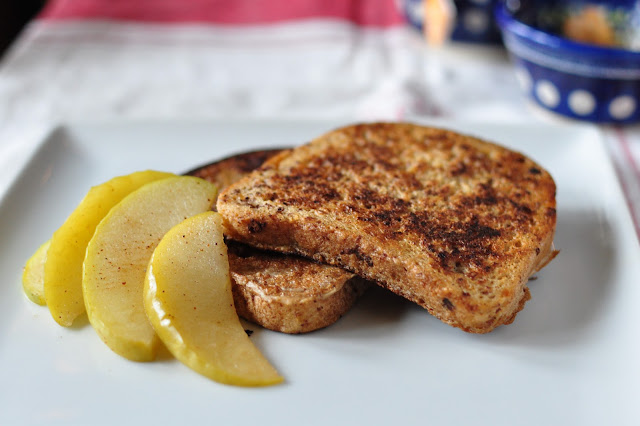 French Toast
(Mostly copied from my little cookbook, because I don't ever use measurements anymore for this recipe...if you feel like it needs anything else, feel free to play with the recipe!)

Beat eggs with milk in a medium sized bowl (wide enough to fully dip your bread in). Add cinnamon and vanilla, mix thoroughly. Over medium heat, melt about 1 tbsp butter in a skillet. Dip bread slices into mixture, allow to soak for a couple seconds, then transfer the bread to your hot skillet. Cook on one side until the top is no longer wet looking, then flip and cook for another minute or so, until brown.

Topping ideas:
- peanut butter and maple syrup
- butter and powdered sugar (we did this when we were kids!)
- berry sauce
- honey and blueberries
- applesauce and cinnamon

Put apple slices, sugar and cinnamon into to a small pan, stir, add 1/2 inch of water, and bring to a boil. Cook until apples are soft, but not mushy.

Have a peaceful, joy-filled Saturday! 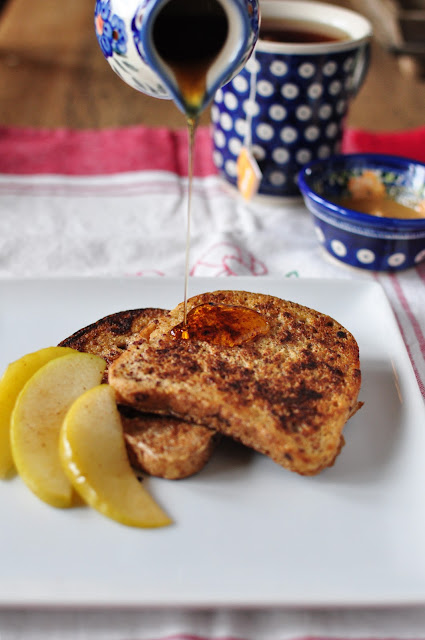 To Kris, from Oregon-- thank you for the lovely embroidered towel! I am loving it!